Home / About Us / About Bali

Bali is an Indonesian island located in the westernmost end of the Lesser Sunda Islands, lying between Java to the west and Lombok to the east. It is one of the country's 33 provinces with the provincial capital at Denpasar towards the south of the island (strictly speaking, the province covers a few small neighbouring islands as well as the isle of Bali).

The island is home to most of Indonesia's small Hindu minority. In the 2000 census about 92.29% of Bali's population adhered to Balinese Hinduism while most of the remainder follow Islam. It is also the largest tourist destination in the country and is renowned for its highly developed arts, including traditional and modern dance, sculpture, painting, leather, metalworking, and music. Bali, a tourist haven for decades, has seen a further surge in tourist numbers in recent years. 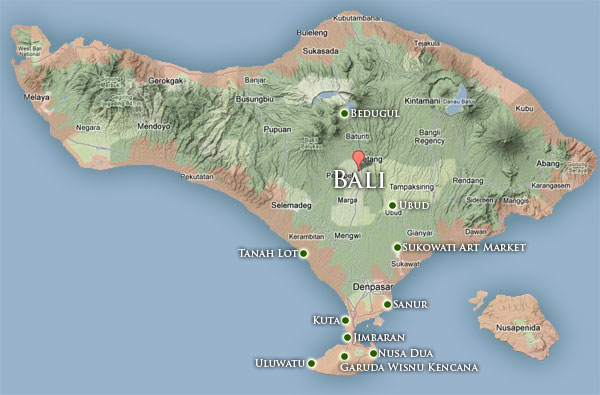 There are many interesting things and places to enjoy in Bali, such as : 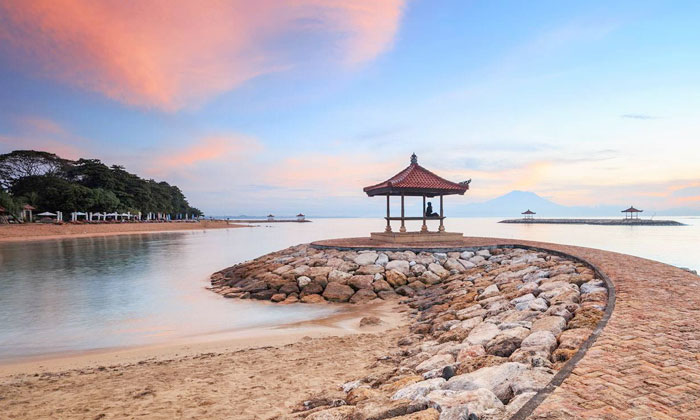 Sanur is a coastal stretch of beach of Denpasar city of southeast Bali, about 30 minutes drive from Ngurah Rai International Airport, which has grown into a little town in its own right. The northern part of Sanur beach was used as the landing site for the Dutch invasion troops during the Dutch intervention in Bali (1906). During World War II, Sanur was again the entry point through which the Japanese forces landed to occupy the island of Bali. Today Sanur contains a number of resorts and is a popular tourist destination. Sanur is famous for its sunrise view. 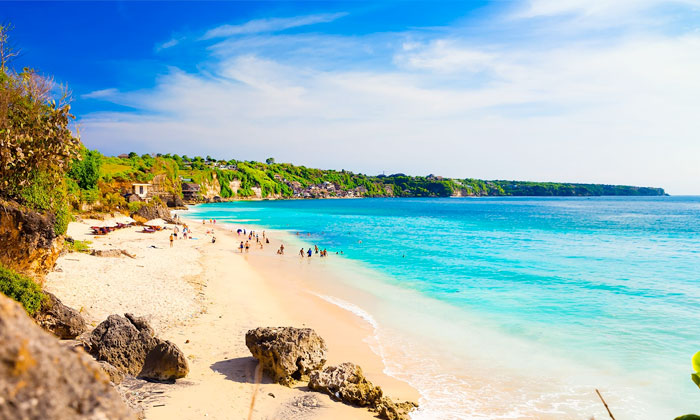 Kuta is administratively a district (kecamatan) and subdistrict/village (kelurahan) in southern Bali, Indonesia. A former fishing village, it was one of the first towns on Bali to see substantial tourist development, and as a beach resort remains one of Indonesia's major tourist destinations. It is known internationally for its long sandy beach, varied accommodation, many restaurants and bars, and many renowned surfers who visit from Australia. It is located near Bali's Ngurah Rai Airport. 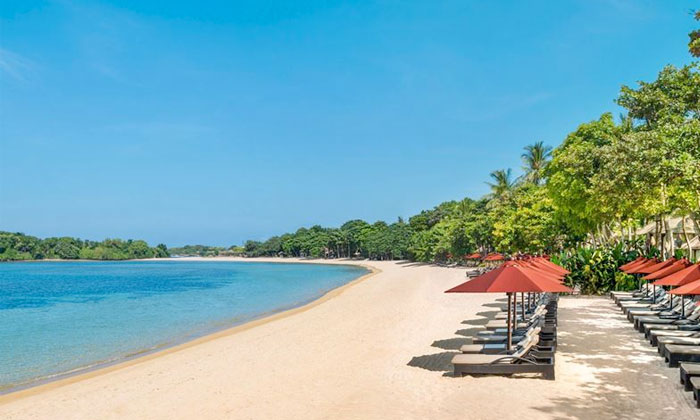 Nusa Dua is known as an enclave of large international 5-star resorts in south-eastern Bali. It is located 40 kilometres from Denpasar, the provincial capital of Bali, and administered under Kuta South District. Nusa Dua means two islands. Immediately north of Nusa Dua enclave is the peninsula of Tanjung Benoa that includes less exclusive hotels and Benoa village. A multi-denominational area, it includes a mosque, and Chinese and Hindu temples in close proximity. Much of the beach's sand was eroded away following the mining of the nearby barrier reef for construction materials. Benoa Harbour is also located here for yachts and small ships. 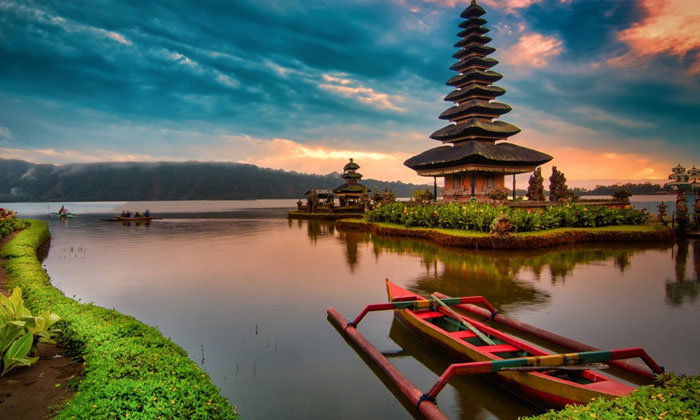 Bedugul is a mountain lake resort area in Bali, Indonesia, located in the centre-north region of the island near Lake Bratan on the road between Denpasar and Singaraja. Bedugul is located at 48 kilometres (30 mi) north of the city of Denpasar. Other nearby lakes are Lake Buyan, and Lake Tamblingan. Bedugul enjoys a mild mountain weather due to its location at an altitude of about 1,500 metres (4,900 ft) above the sea level. Major sites in Bedugul are the Pura Ulun Danu Bratan water temple and the Bedugul Botanical Gardens. The Botanical Garden, opened in 1959 under the name Eka Karya. With a total area of 157.5 hectares (389 acres) is the largest in Indonesia. 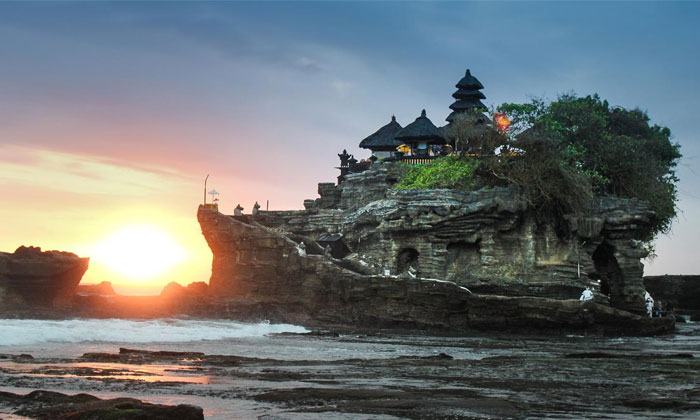 Tanah Lot is a rock formation off the Indonesian island of Bali. It is home of a pilgrimage temple, the Pura Tanah Lot (literally "Tanah Lot temple") and a popular tourist and cultural icon for photography and general exoticism. Tanah Lot means "Land [in the] Sea" in Balinese language. Located in Tabanan, about 20 km from Denpasar, the temple sits on a large offshore rock which has been shaped continuously over the years by the ocean tide.

Tanah Lot is claimed to be the work of the 15th century priest Nirartha. During his travels along the south coast he saw the rock-island's beautiful setting and rested there. Some fishermen saw him, and bought him gifts. Nirartha then spent the night on the little island. Later he spoke to the fishermen and told them to build a shrine on the rock for he felt it to be a holy place to worship the Balinese sea gods. The Tanah Lot temple was built and has been a part of Balinese mythology for centuries. The temple is one of seven sea temples around the Balinese coast. Each of the sea temples were established within eyesight of the next to form a chain along the south-western coast. However, the temple had significant Hindu influence. 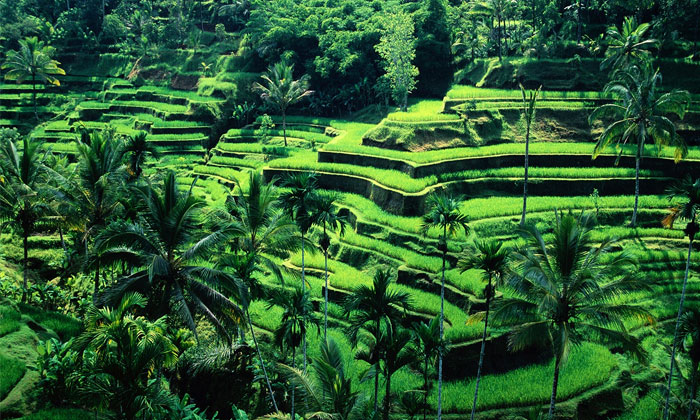 Ubud is a town on the Indonesian island of Bali in Ubud District, located amongst rice paddies and steep ravines in the central foothills of the Gianyar regency. One of Bali's major arts and culture centres, it has developed a large tourism industry. Ubud has a population of about 30,000 people, but it is becoming difficult to distinguish the town itself from the villages that surround it. 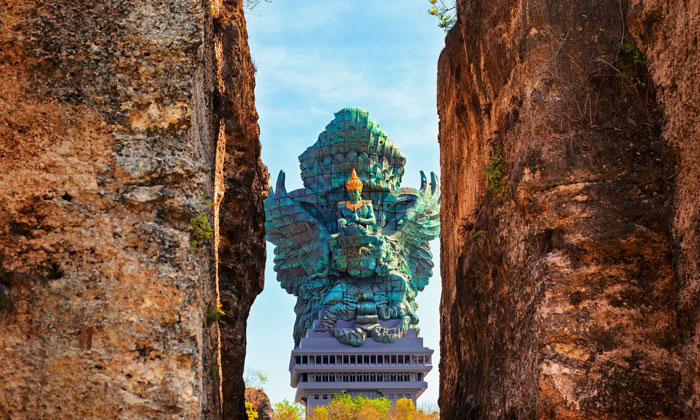 Mandala Garuda Wisnu Kencana, or Garuda Wisnu Kencana (GWK) is a private cultural park on the Bukit Peninsula at the southern end of the island of Bali in Indonesia. Bukit is a limestone plateau with Uluwatu to the west and Nusa Dua to the eastern. It is devoted to the Hindu god Vishnu, and his mount, Garuda, the mythical bird who is his companion.

Currently, the statue of Vishnu is 23 m high, although the original plan was for a 146 meter gold plated Vishnu riding Garuda on top of an 11 storey entertainment complex. When it's completed, it will be the largest statue in the world. 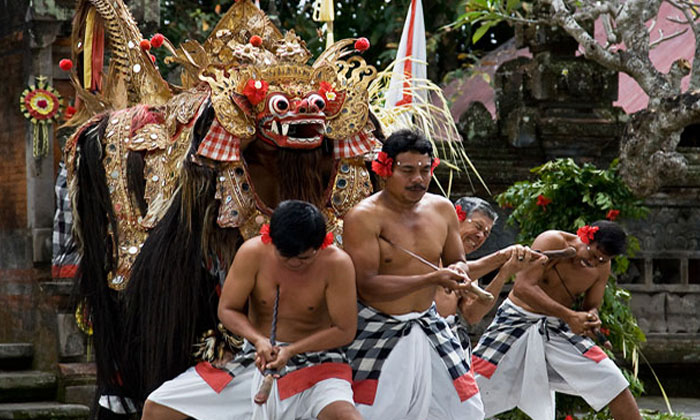 Barong is a lion-like creature and character in the mythology of Bali, Indonesia. He is the king of the spirits, leader of the hosts of good, and enemy of Rangda, the demon queen and mother of all spirit guarders in the mythological traditions of Bali. The battle between Barong and Rangda is featured in Barong dance to represent the eternal battle between good and evil.

In traditional Barong dance performance, he is portrayed in his struggles against Rangda, it is the popular part of Balinese culture. The mythical creature would dance along the street to the calon arang dance. A priest would throw holy water at it. 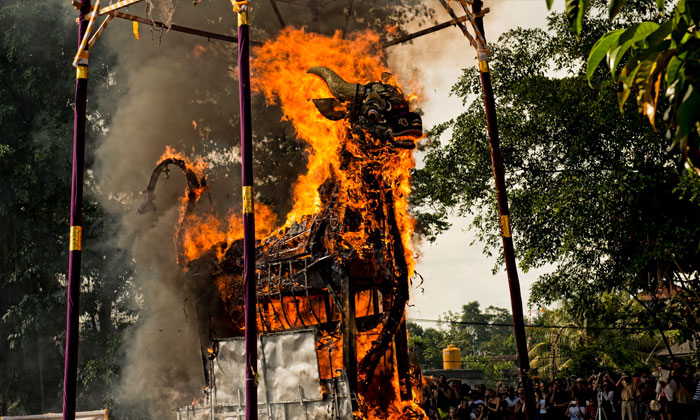 Ngaben, or Cremation Ceremony, is the ritual performed in Bali to send the deceased to the next life. The body of the deceased will be placed as if sleeping, and the family will continue to treat the deceased as sleeping. No tears are shed, because the deceased is only temporarily not present and will reincarnate or find his final rest in Moksha (freeing from the reincarnation and death cycle).